You Want To Ski What? How To Handle Variable Snow Conditions

Winter’s done. Spring’s here with all the sun, warm temps and freak snow storms. Now, the only thing to worry about are the conditions. Two weeks ago we got 10″ and it was hell. Fresh snow on top of spring snow that has slopped up in the heat the day before and froze at night before the storm. What we ski instructors call “variable” and “dust on crust”.

Volkswagen-sized ‘sketch’ bumps have found their way to the formerly soft powder paradise of the Wasatch Mountains in Utah. This spring, the snow on the bumps freezes overnight. If new heavy wet snow comes in that will stick to the frozen and pad it, great. If it’s light and dry, eww. How about a ton of fresh snow followed by sun and 50 degree temps? Double eww. Variable conditions are by definition erratic, inconsistent, irregular and unpredictable. Skiing them is like riding a bronc at a ProAm. 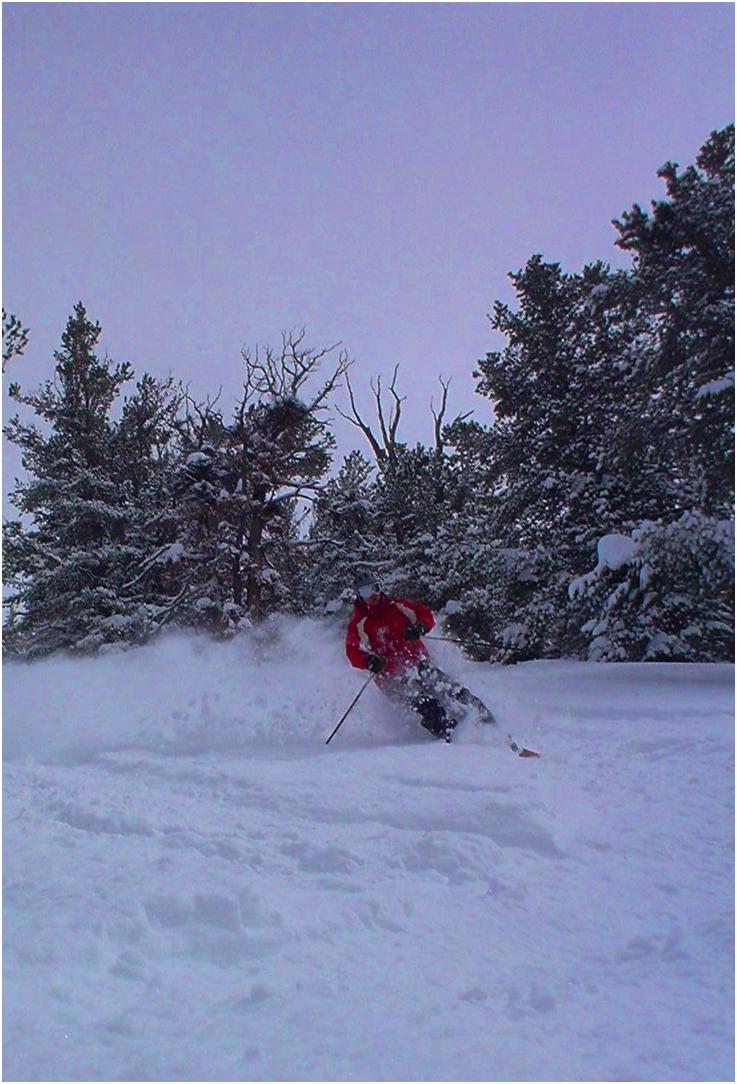 “Growing up in the Pacific Northwest I was raised on crud skiing,” says DECL (PSIA Division Education Clinic Leader) examiner and Aspen Ski Instructor Bonnie Maclaurin. “Honors were granted to those who could ring the most water out of their glove at the end of the day. Plastic bags were used for lining ski boots and logoed garbage bags were sold at ski areas for outer-layers when “clear flakes” dominated the weather forecast.

Yesterday, after a morning of free-skiing (at Aspen) and searching out powder stashes in the trees, I slowed down and took notice of how many people struggled. The snow was beginning to set up and the boot-top powder was definitely tracked out. They may have never ventured off of the groomed and now there is not a groomed run in sight.”

The more experienced skier skis everywhere- in bumps, in trees, in fresh powder, carving up fresh corduroy and capable of holding an edge on eastern boiler plate. However, even the pros can struggle with “frozen chicken heads” topped with half a foot of powder or the wet heavy “Sierra Cement” and “Cascade Crud”.

The masochistic ski instructor, training for an exam or trying to outdo the guy at the next locker, may search out the gnarliest most challenging conditions. But most of us locals sit it out- unless we have a lesson or friends in town.

If for some reason you find yourself somewhere between an epic powder day and spring corn here is some advice from a pro:

When snow conditions vary, start with a ski like the Nordica Enforcer or Atomic Vantage. Not too fat, not too skinny. Rarely less than 100mm at the waist with some sort of rocker or early rise in the tip for easy steering.

Be aware of the conditions on the mountain from the previous day. What runs were recently groomed? How soft or hard were the off-piste conditions? Ski the appropriate aspects based on sun exposure and daytime temps. Know when the snow has been through a freeze –thaw cycle, if it has been frozen solid for days, or never froze because the nights were warm. Many will approach a spring dump with first chair and a Clif Bar in the pocket then call it a day at 1:30 or 2 p.m. before the conditions become “mashed potatoes”.

For those who choose to ski in tough conditions or find themselves suddenly stuck in challenging snow here are some pointers. Skiing giant, choppy moguls, boiler plate ice or a combination of both can still be a science. Prepare yourself for variable conditions by practicing on a wide variety of trails, with different types and sizes of turns, taking different lines through the bumps and executing a variety of skiing tasks like hop turns. You won’t love practicing these but they can save your day in the steeps, a narrow chute and breakable crust (think crème Brules).

Try and make a tic-tac-toe game in the snow by jumping up and landing 90 degrees to the side or from a hockey stop back into the gravity line. Also making a porpoise type maneuver or dolphin turn. To accomplish this task you lever your hop off of the tail of the ski so that the tips leave the snow first then as the tail comes off the snow; the tip is directed back to the snow and guided back across the hill for the turn.

One of the biggest technical problems that skiers face in challenging conditions is that many are too heavy on their outside or downhill ski. From a fundamental standpoint in skiing, pressure moves from ski to ski and is directed to the outside ski of each turn. But each ski can end up in very different types or depths of snow when the conditions are variable and you want to be able to wrok both skis. If all of your weight is on just one, the other may be ripped out from under you.

Another problem stems from how you release the edges of the skis and move from one turn to the next. The combination of tipping and twisting the skis need to be dialed in. A ‘racer’s edge’ is not so affective in variable conditions. The skier will lose the ability to twist the ski and guide it if there is too much edge too early in the turn. A flatter ski is better. You have time to adjust to the snow quality.

There is not one single way to release the edge of the skis from the snow. The hop turn helps when the skis get bogged down it mucky, heavy wet snow or breakable crusts. But it is exhausting. Use it when you’re totally stuck or you want a workout. Many skiers use an extension movement with the leg of the soon-to-be outside ski to move the hips into the fall line and flatten the downhill edge you’re already on. Trouble is you could wind up with a stem or wedge at the top of the turn that makes for a one-foot, then the other foot move and your skis (and you) get tossed in the variable snow.

Rather than solely extending the leg of the new outside ski you can focus on flexing the old outside ski leg while you continue to guide it through that arc and towards the new arc. This allows the legs time to match up in length through the arc. Pressure evens out between the two skis and we are better able to maintain equal pressure between the two skis. You could also add a more active retraction movement (by pulling up your knees or feet in the turn) for extra steeze.

Don’t get discouraged if you feel like you look like you’re hacking. Even the seasoned instructor or pro might not handle variable snow conditions 100 percent of the time and get bounced around. The difference is that they practice such a wide variety of turns, in so many different situations and with a quiver of movements that they can make it look smooth and easy. That doesn’t mean it’s fun. 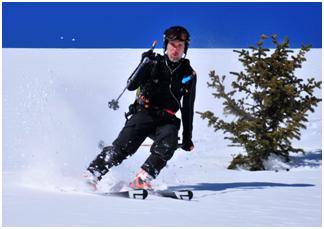 GET OUT OF THE BACKSEAT

A final note on variable conditions- don’t lean back unless you’re trying to keep from getting bogged in heavy snow. Maintain balance over the feet and you’ll have a stable core- everything from the shoulder to the pelvis. Core stability protects your spine. It enables you to quickly correct your balance over the skis when you get rocked by snow conditions. With a solid core, you can make simple leg and feet adjustments as you move down the mountain without throwing your whole balance off. BTW, the flex at your hip should match the angle at your ankle joint for core stability. 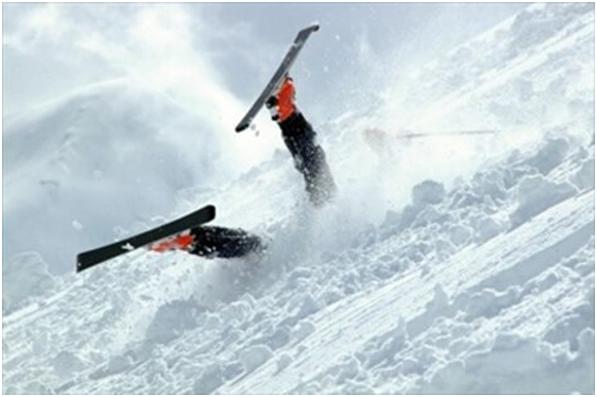 Changes in temperature, precipitation, moisture content, sun, wind and human traffic all have an effect on your ski terrain. It could be an “anything goes” day. A client asked me if it was okay to wedge, she was under the impression that it was “bad” to do so. There are times when anything goes; for example, “when in doubt, stem it out”. Stem turns are old school but they might be the only thing that keeps you from falling or getting stuck in nasty conditions. The occasional punch to the sky with your outside hand, too, is another useful move when your feet are wearing cement shoes. Don’t worry we won’t tell. We’re too busy trying to make it look easy.

Bonnie Maclaurin is a PSIA Level 3 Ski Pro with the Ski and Snowboard Schools of Aspen Snowmass. She is also part of the PSIA Intermountain education staff for both Alpine and Children’s Specialist .