UPDATE: Arapahoe Basin reopened May 28, 2020, with a TBD closing date. All passholders and day ticket purchasers ($99) have to submit to a raffle two days prior and make a reservation if their name is drawn before they can head up. The ski area is allowed to admit only 600 skiers and snowboarders but there will be no tailgating and partying after slushing it up on the 20 open runs and three chairlifts. They will have to wear face coverings in designated areas and no food will be sold.  Still, they get to ski!

With no more ski areas open – HUGE shout out to COVID-19 for that- and just a smattering of diehards uphilling for turns, we can officially call an end to the 2019/20 ski season. But what about summer skiing?

According to the National Ski Areas Association, some 460 ski areas in 37 states could lose $2 billion from the shutdown. Most areas began to shutter around March 15, 2020, just when spring ski breakers were marking off their vacation to-do lists. Jackson Hole had already announced that they would stay open a week past their normal closing to accommodate for the late Easter weekend. With fresh snow in the forecast, resorts were primed for a bustling spring before pandemic panic struck. Then everything came to a screeching halt; everything but our desperate need to keep skiing.

March is not only one of the snowiest months of the year but also the busiest after December, pulling in about 20 percent of overall skier visits for the season. Not so for 2020.  We won’t harp on the financial hits that the resorts will sustain. You can read about that here. It’s the emotional hit that rippled through ski communities, causing mass devastation.

Thousands of season passholders sat sad faced, wondering if the areas would reopen or at least if they were going to reimburse them for the lost ski days. Those who only ski two weeks a year won’t understand. When you are a local with six ski areas to choose from and you measure your ego by the number of days you ski, one of the major factors to consider before dropping $1k on a pass are the projected closing dates.

Last year, Snowbird stayed open through June and reopened for a special 4th of July ski day. Whistler closed May 27,  A-Basin June 2, Squaw Valley July 7 and Mammoth Mountain on July 28. Therefore, if you lived in Utah and purchased a Bird 19/20 season pass you potentially missed out on three months of skiing. Let’s break it down. With the season starting in December, you might predict seven months of skiing based on last year.  Yet even without counting on July 4th skiing, Snowbird traditionally skis through May. That’s six months. They closed March 15 giving you only 3.5 months on a “six-month pass.” Most ski resorts, by the way, have yet to address this concern but perhaps they won’t have to if they can reopen before it’s too late.

Summer Skiing Not out of the Realm of Possibility

There may still be a slim (albeit VERY slim) possibility that a few areas will re-open for summer skiing if the quarantine ends before all of the snow melts. As of this post, Arapahoe Basin posted on their site that they could reopen even if it’s as late as June if conditions allow. “Don’t be discouraged. This is a marathon and A-Basin is a marathon runner. What other area stays open from mid-October to July 4th? We all need to do the right things now if we want to get open again.”  Update: The Governor of Colorado extended the closure order through May 23, 2020.

Mount Baldy ski area in Southern California reopened on April 22 when San Bernadino County allowed golf courses to reopen. After 11 days, they closed out the season, “Thanks to the most solid crew any mountain has ever had, several feet of late season snow and some very respectful skiers & riders we were able to open again on 4/22/20 to finish off a season like this properly,” the resort’s website stated. 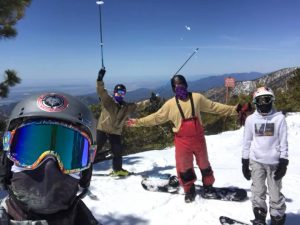 Vail Resorts (which includes Whistler, Breckenridge and Heavenly resorts) posted, “We made the difficult decision to close our North American resorts and retail stores for the 2019/20 winter season. ”  Mammoth Mountain’s statement: There is no estimated reopening date for Mammoth Mountain at this time. Reopening the ski area is dependent on the COVID-19 situation, state and federal mandates, as well as other safety factors.

Squaw Valley hasn’t changed their stance that “while the possibility of Squaw Alpine reopening for skiing and riding still remains, we have no estimate for such action. The resort will be closed until further notice.”

Oregon Ski Resorts At The Ready?

Oregon Gov. Kate Brown said this week that the state will allow ski resorts to reopen.  Mt Bachelor, Ore., had earlier announced they are “closed for now but our goal is to reopen as soon as we can.”  In the meantime, they were the first ski area to officially offer a $100 voucher to all 19/20 season passholders and can be used for pass products, lessons and rentals in 20/21. Timberline Ski Area is usually running race camps throughout the summer so this has to be good news for them.  The plan as outlined is that guests must make online reservations but prepurchased lift tickets and passes will be valid. Food would be to go and social distancing practiced in the parking lots and chairs.

Utah skiers, in particular, were underwhelmed with the response from Alterra’s Ikon Pass which is good at Solitude and valid for five days at Deer Valley and Snowbird/Alta. Extended purchase deadlines, slight discount for renewals (about $120), interest-free payments, and insurance against another pandemic closure just aren’t enough enticements. My friend and former ski instructor Tony Fantis told the Salt Lake Tribune, “Why would I reinvest now for a season I don’t know is going to happen? From a risk standpoint, I would rather wait and pay more later.” That is despite Alterra promising customers can defer their pass to the 2021-22 season if it looks like they couldn’t use it this season … so long as they do so by December 10.

Vail Resorts announced their “severance package” shortly after a class action lawsuit was filed against them and Alterra. Epic Pass holders will be credited 20-80 percent toward a 2020-21 pass renewal, depending on how often their 2019-20 pass was used. For skiers ready to renew, VR has offered a pass deposit of $49 with the remainder due in September.

Mountain Collective is the worst of the bunch and you would be wise to avoid it. From their website- “The Mountain Collective Pass is non-refundable and non-transferable. All purchases are final and may not be refunded, transferred between parties, or transferred to another season.” Basically, you get nothing for last season and if anything happens to cause the season to end early next year, you are SOL.

If the Resorts Do Reopen for Summer Skiing Will We Even Care By Then?

Though we still wish we could ski, many coronavactioners are finally ready for summer; for the rain to stop, the snow to melt, the warm skies to shine because, hell, if you can’t ski and don’t have backcountry skills, at least we can hike and bike. The other thing to consider is once we get in the summer groove, will we want to go back to skiing? TBH, it might take two feet of fresh powder to get me back in the mood.

But after you get your fill of dirt, there’s always a trip to Argentina in July; if the country lifts their air travel ban before September. The resorts down south are poised to open for their winter season but they are tracking the spread of COVID-19 as we speak. If ever there was a time to visit the southern hemisphere, it would be this year, weather and COVID contingent of course.

Must Haves for Summer Skiing

Shred Goggles – Two-time Olympic Gold Medalist Ted “Shred” Ligety knows something about skiing year-round. So trust him when he makes goggles that kick butt on summer sun. The Shred goggles won’t fog no matter how heated your dome gets. It has a spherical lens with a dramatically wide field of vision so you can spot bikini-clad Betties from anywhere. The contrast boosting lens (CBL) allows you to see just as well in flat light as bright sun and, even though the lens doesn’t look super dark to the naked eye, it provides plenty of UVA, UVB, UVC protection. The NoDistortion tech in the lenses prevents, yes, distortion you get from a curved lens at altitude while the high quality “Whipped Cream” multilayer face foam ensures that this go-to goggle fits under just about every helmet. Plus, it won’t pack down like most foams so you can count on them for next season too. 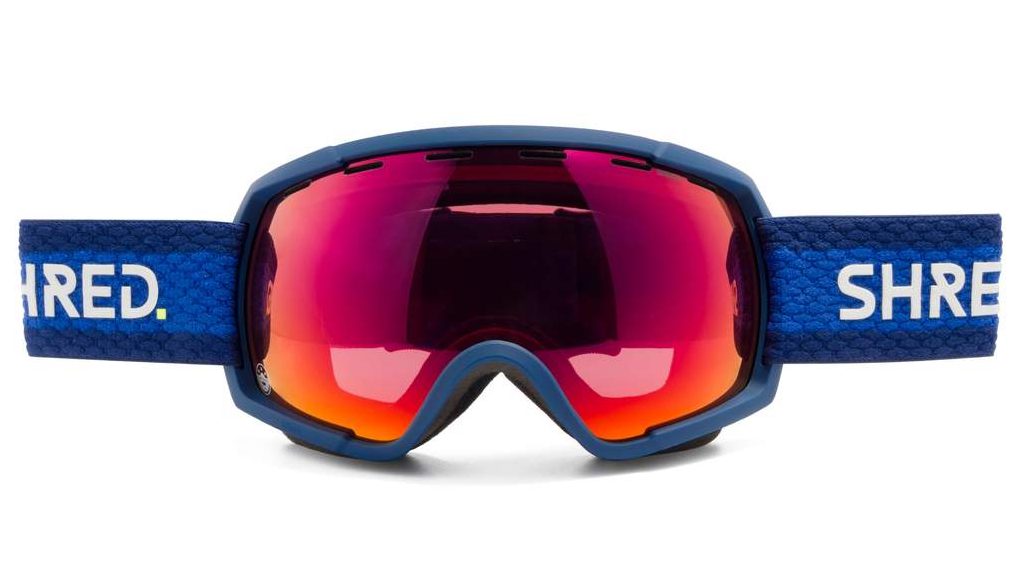 BRYNJE Women’s Wool Thermo Longs Base Layer with Inlay   might look like something from a steampunk rave but it totally makes sense when you think about the heat generated skiing in 60-degree temps. All you want to wear is a shell pant but that feels nasty against bare skin. You won’t overheat in the Mesh Thermo Longs and the integrated shorts and reinforced knees keep you from chafing. 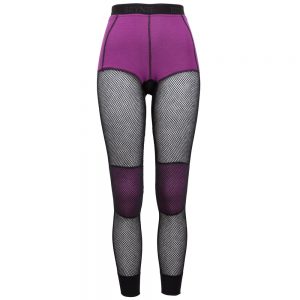 Helly Hansen’s Odin Mountain Softshell Jacket is the ultimate spring and backcountry shell. It’s a warm, breathable, comfortable worn alone or with a mid-layer or thin puffy underneath for cooler days.  This lightweight beauty is made of 4-way stretch with a weather protective membrane and another with maximum breathability. It moves with you whether you climb or ski. 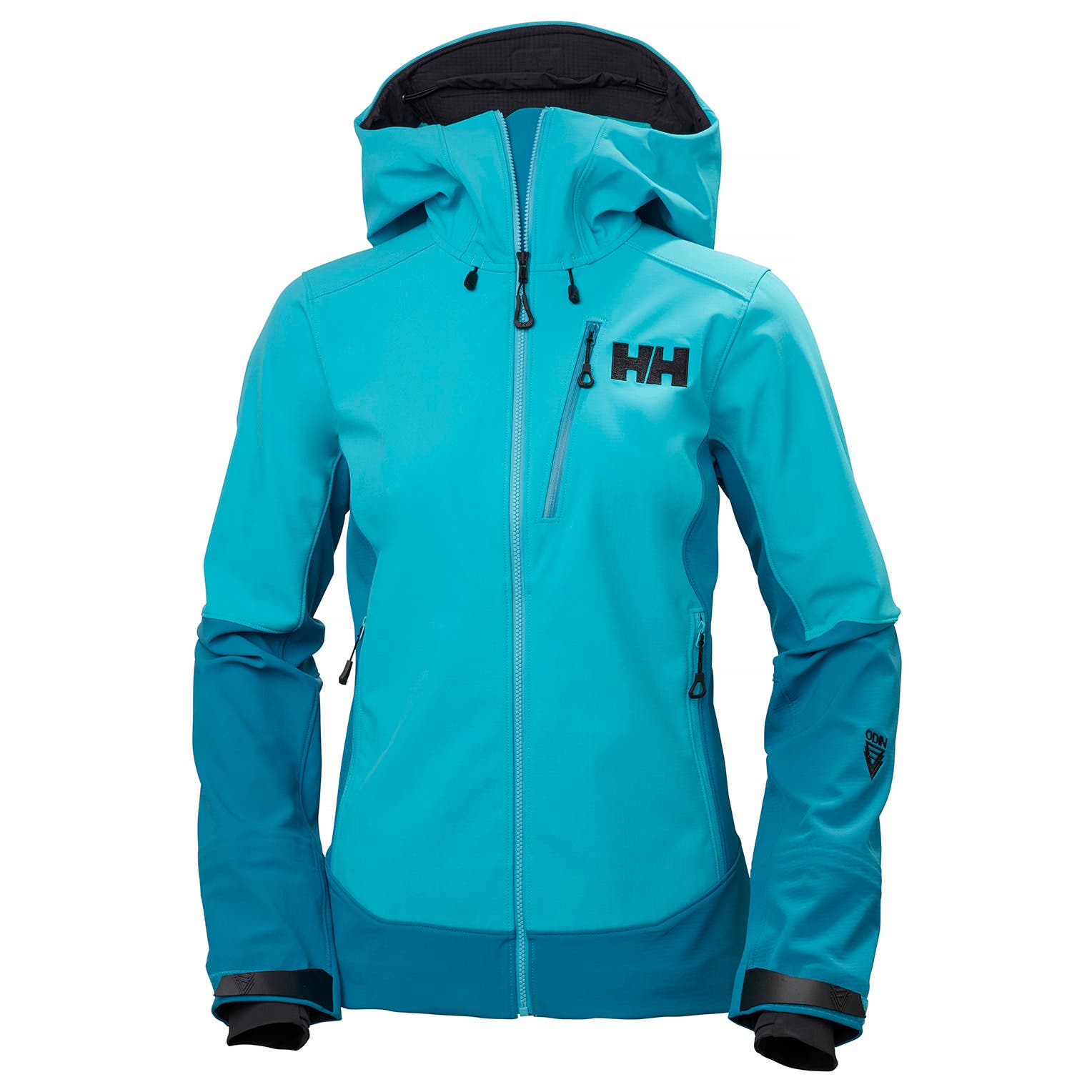