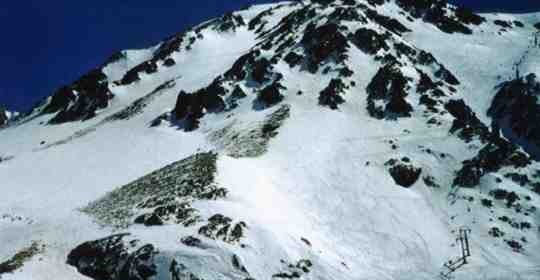 The call came three weeks before September 8. I was going to Las Lenas, Argentina, for (their) spring skiing. The Extremely Canadian World Tour had space. Wahoo! I thought. Then, Oh no, I’m not ready to ski. It’s still summer and I’ve been a sloth. I’m supposed to have another month before I worry about whipping this bod into ski shape. My quads were half their winter strength; ok, my arms were relatively strong from rock climbing and could handle the poling, but no way was I going to survive seven consecutive days of 4,000 vertical-foot runs. My head cramped with panic.

Las Lenas is big mountain skiing. The vertical drop of the lift-served in-bounds area is a hefty 4,035 feet, with gradients ranking from 12 to 53 percent. At this time of year we were guaranteed heavy spring mush, corn, and perhaps powder depending on the storm cycle. The EC guides have been skiing since June and were ready to push us past our limits of last year without pandering to our jelly bellies. As my leader Steve barked like a drill sergeant, “Pain is just weakness leaving your body.”

But I had three weeks. I hit Quantum Fitness’ Body Bar and Core Conditioning classes five days a week, focusing on lower body conditioning, abs and back work (for the anticipated backcountry hiking with ski-strapped packs). Slowly, I gained strength and agility. I was making my way back to the slopes. The one thing I didn’t want was to try to ski myself into shape and waste the whole trip huffing and hurt. “The body will, in the end, need the specific skiing environment that gives it the final ski shape,” said Per Lundstam, U.S. Ski Team strength and conditioning manager. “But this will occur better if you have a good conditioning training base behind you.”

Lundstam develops the training program for the USSA athletes but says everyone should look to the season at least 12 weeks out. The first six weeks of workout effect the inside of the body, the second six weeks will display itself in your newly honed physique. I didn’t have 12 weeks and neither do you but you go with what you got. If the season officially kicks off Thanksgiving weekend, we have less than eight weeks for ski conditioning.

On limited time, Lundstam helps athletes like Steve Nyman get back quickly in their boots even after serious injury. “You should have a solid month of training before you ski at the recreational level,” said Nyman. “You can ski yourself into shape but it is risking injury which isn’t worth it. I never missed a winter until last but my injury was due to crashing at 60 mph in a downhill (race).”

Lundstam admits there are some muscles that can only be addressed while skiing and those little guys do get skied into shape but, for the most part, the better your (pre) shape, the better your time on the hill. If you don’t train, then all your muscles will be sore long before day’s end.

Las Lenas’ base is at around 7,000+ feet, with a climb to often 13,000 feet. The steeper altitudes demanded that I be aerobically sound, something not truly developed by rock climbing. But you don’t need to go indoors to a gym for the aerobic part like I did. Bike, hike, run, motocross, dance, inline skate. or swim to get your heart rate up for half an hour, three to four times a week. That should do it. Track sprints, mountain sprints (straight up a hill), and field games garner agility and tone fast twitch fibers to tackle those steep, aggressive descents and bump runs. Core exercises like crunches and yoga poses develop balance and power. Flexibility can also help prevent knee injuries such as tears to the anterior cruciate or medial collateral ligaments, the most common mishap on the slopes.

One great toner involves sitting in a crunch (prone) position on your back, knees bent, feet on the floor, holding a weighted ball in outstretched hands. Reach the ball to the outside of your left knee, then right knee, to work the oblique (side torso) muscles. Repeat 10 times on each side. For stretching junkies, check out a Yoga class.

Speaking of awkward positions, because your body takes on a steady squat with frequent twisting of feet and knees when you ride, building leg strength for long runs in all conditions is key. That means focusing on leg presses, lunges, leg extensions, leg curls, squats, and leg adduction and abduction. Ten to 15 reps, three or four times per week. Make sure you stretch your hamstrings and quads before and after activity. Finally, pop in a ski video and read about ski technique before you hit the hill. Picture how you want to ski and mimic those movements in your exercises. You’ll be surprised how much it can help your pre-season game.

As I trudged the 90-minute hike up the ridge to the Collar, or Necklace as local Las Lenians call it, I realized I was out in front without breaking a sweat. The summer spare tires from too many backyard barbeques and not enough snow took their toll on the guys. I waited in the 40 mph peak winds for them to catch up. The 3,000 vertical foot, untracked bowl beckoned. However, just because my heart was good to go did not mean my feet were. The sticky, wet cement could suck the skis off my boots and I couldn’t buy a turn that first day of my World Tour. I was a miserable failure, but I still felt strong despite the disconnection between head and feet. That would take mileage to cure. (To answer the age-old debate of whether skiing in September is part of last season or the start of this one, it’s this one. You can tell by the amount of flailing you do as compared to April.)

By my final day, I skied every run without hesitation, hiked to the ominous Cerro Martin (45 min.) with two EC defectors, skipped lunch, and skied two more runs before ending a brilliant Las Lenas experience. But, oh what a tease. After a week of Extremely Canadian skiing, I can’t wait for November. On the bright side, now that I’ve started my training, it’ll only get more intense in the days leading up to the opening bell. Don’t wait until two weeks before your first set of turns on that thin fall base layer at Solitude to get into ski shape. You’ll make yourself an instant target for snowsnakes and other elements of evil that conspire to Charlie Brown you. Be a hero from the moment you feel the glide beneath you.